John Fitzgerald, reporter in The G&M Canada's largest circulation newspaper, joined Sailtogether.com for a Caribbean sailing cruise. This cover story describes his own adventure and experience.

The wind had been a vigorous and friendly companion during the time we sailed Rose. For 10 days last winter, the sleek French-made craft had taken our group of nine -- my spouse Gérard, myself and a handful of friends and acquaintances -- on a voyage through the vivid, sun-splashed waters of St. Vincent and the Grenadines.

St. Vincent is the largest of the more than 30 islands that, spread out like a kite's tail, make up this Caribbean nation. Once part of the British Windward chain, the Grenadines offer some of the world's best sailing waters. Consistent yet manageable winds, combined with charming and convenient anchorages and ports, draw North Americans and Europeans anxious to flee winter's sludge and sameness. (More than a few of these escapees, no doubt, are also looking to side-step the stresses of the holidays.) There is a bounty of charter operations in the area, catering to everyone from middle-class mariners to the uber-rich.


Speaking of the latter, the island chain is home to Mustique, the pampered 5.5-square-kilometre haven made famous by the late Princess Margaret. The island was formerly owned by the irrepressible Lord Glenconner (a.k.a. Colin Tennant), who now resides on the Beau estate in St. Lucia 40 kilometres to the north; its part-time residents currently include Tommy Hilfiger, Mick Jagger and Shania Twain.

On one particular occasion, however, the friendly wind became a pain in the backside. More timid than when we were at sea, its mild exertions nevertheless carried a canopy of smoke into Keartons Bay, where we were moored on the west coast of lush, mountainous St. Vincent.

During a walk that morning to a nearby waterfall, past avocado and mango trees, and with flourishes of bougainvillea dangling above our heads, we'd seen farmers burning off surface vegetation up in the hills.

Back on the boat, we could smell the smoke rather than see it, which made its presence somehow sinister. Tiny cinders, like dark stars, started sprinkling themselves mischievously across Rose's usually gleaming, sheet-white deck. With my eyes smarting, I took some solace in the notion that the offending smoke was probably also descending upon neighbouring (and much prettier) Wallilabou Bay, where a Hollywood crew was shooting scenes for Johnny Depp's Pirates of the Caribbean sequel (slated for release next summer). Looking for a spot to anchor off St. Vincent, we'd been shooed away from Wallilabou by a man in a motor boat.

Laurent Messarra, our "Capitaine," had chartered Rose in the Martinique capital of Pointe-à-Pitre. With six compact cabins and three heads, she was a 15-metre-long Dufour Atoll 50, similar to many others we encountered during our journey.

While in Pointe-à-Pitre, the Beirut-based architect and committed part-time sailor had joined his French wife, Camille, in stocking the craft's freezers and cupboards with an array of Gallic cheeses, jams and biscuits, as well as French wines, cans of cassoulet, smoked chickens, fruit, rum and at least a dozen other products. Stéphane, one of our boatmates, who came from the southern French city of Montpelier, brought a large tin of foie gras, which was devoured -- along with our two bottles of Niagara ice wine -- during our first feast on board.

With the music coming from the tape deck at the front of the galley, we had cast off about a week earlier under drizzling skies from the Rodney Bay Marina in St. Lucia. Our course took us briefly to the inlet of Maginot Bay and on to Soufrière beneath the dramatically steep, 750-metre-high Petit Piton, where we anchored for two days.

From there, we sailed to Bequia, Mustique, Mayreau, Tobago Cays, Union Island, Petit St. Vincent, Canouan and St. Vincent, before heading back under magnificently clear skies and muscular winds to St. Lucia.

A friend of our friends Francis (former provisoir of the Toronto Lycée Français) and his teacher wife Michelle, Laurent had put together the itinerary for our journey, one of several he informally offers to sailing enthusiasts in the Caribbean and Mediterranean each year

Gérard and I soon settled into an informal regimen that saw us hurling ourselves off Rose's stern at dawn, the water's current usually strong enough to give us a little exercise before breakfast. Le petit déjeuner usually consisted of fruit we'd bought, including pineapples and mangoes, slices of molasses loaf or baguettes, jams, cheese or crèpes on special days when Francis was inspired to perform

At dinner, there would be vegetable curry, potato omelette or fresh tuna and crayfish we purchased from local fishermen ("boat boys" we heard them called) who invariably presented themselves aboard their small, fabulously painted wooden launches whenever and wherever we moored

But it was the evenings, always fantastically clear, that I relished the most. Some nights, the main sail was lit by a generous moon and I'd gaze above it, mesmerized by the legions of stars

We took a water taxi one day from our boat to Soufrière in St. Lucia, and become part of the early morning atmosphere of the town. Uniformed schoolgirls giggled together as they headed off to their classrooms, while in a narrow ramshackle street, townspeople queued for treatment at a health clinic.

Pulling up anchor off Soufrière at 4 a.m., we proceeded the 60 nautical miles to the island of Bequia. Throughout the day, our experience of the sea was thrilling, Rose dipping and soaring with the rhythm of the waves, her sails fiercely flapping

By late afternoon we were approaching Bequia, its hills rising above Admiralty Bay and the main town of Port Elizabeth. Dotted with gaily coloured houses that seem to cascade down the hills, Bequia was a major whaling and whaleboat-building centre for more than a century. Once harpooned, Caribbean humpbacks were processed on nearby Petit Nevis, where islanders purchased the meat and blubber

We found nearby Mustique too pristine for our liking. There were few people about, except surly-looking gardeners primping overly manicured lawns. But we had great fun diving into the aggressive waves off Mustique's Macaroni Beach, and found a bakery that sold perfectly crusty baguettes and some of the best pain au chocolat I had ever tasted

Another day, we anchored Rose off the coast of Mayreau, an area that measures just 3.8 square kilometres and is home to only a few hundred islanders. One of the ubiquitous boat boys motored up in a battered blue craft, offering to bring ice or do our laundry. He told us he'd cook langoustines for dinner over a beach fire, and then immediately asked what time we'd like him to deliver them

We saw a number of enormous, big-bellied yachts -- like small ocean liners, really -- that made Hamilton, Bermuda their home port. Yet we felt quite superior to them in their smooth, sleek containment. We had nothing to do with the luxuries of smooth rides and proper showers, exotic flower arrangements and uniformed staff

Sometimes, though, I missed my privacy. In exchange, there was the invigorating rough and tumble of the ocean, the bobbing and weaving and being tossed about. The noises I treasured too, wonderful and varied, doors banging and pots clanging, the glorious grunts and moans of the hull. And the furious sound the ropes made as they bashed the galley windows when, under splendid sunshine, we were fully under sail. 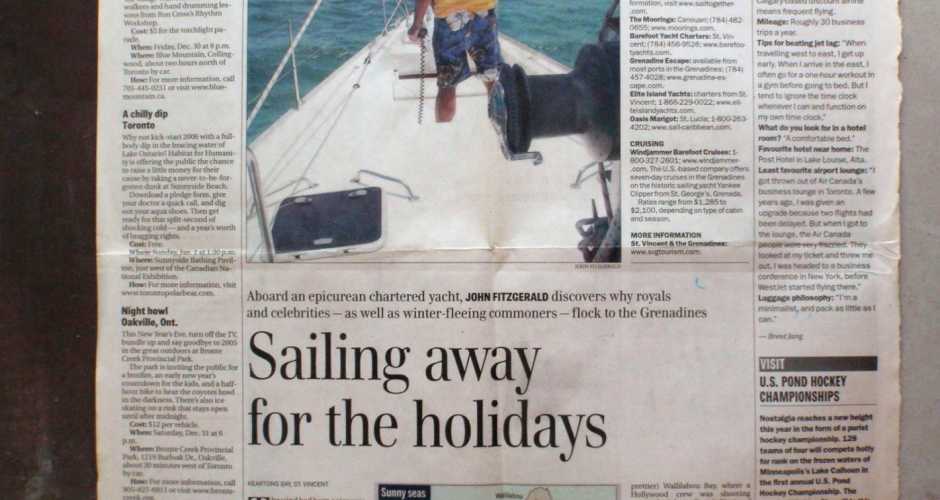